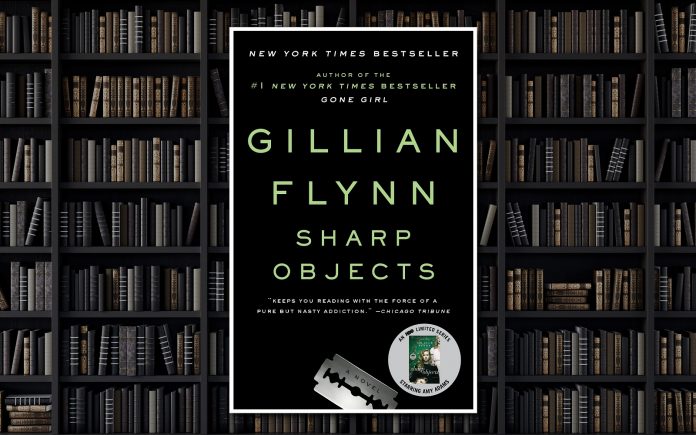 Trigger warnings for the book include: slight drug use, alcohol, minor self-harm references (no actual self-harm)

A fishbowl-mentality, life in a small town, everyone living in their own filth: You’re thumbing through the Sunday morning newspaper, filling your veins with caffeine and your lungs with nicotine as you skim over paragraphs of local opinions and mindless blurbs, the vivid details of someone else’s tragedy, pages still wet with morning-dew. Dead girls everywhere when a smile smears across your face, a blush of pride on your cheeks, still finding it within you, the nerve to feel thankful, because at least it happened to someone else’s marriage and someone else’s family, any other child, really.

Gillian Flynn writes loud and disgusting. Stories like screaming secrets. Novels that consume your mind, make you uncomfortable in all the right ways, Sunday-morning thankful. Words so visceral you can almost taste the sour as your eyes scroll across the page. Her towns smell of shit and stale saliva, her dive bars of pig blood and urine. Characters reeking with body odor and gossip. Unbreathable air so thick you should be able to cut a hole in the stink to get some relief.

Back in the plaid-patterned days of the mid-2000s, when the gravest of literary tragedies could be easily boiled down to variants of the same commercialized character and materialistic mysteries, Stetson-wife-women and Ricky Ricardo-husbands, author Gillian Flynn shined her anomalous light on the dark side of female psychology. Sharp Objects, Flynn’s debut novel was by no means a conformer to the era’s current tropes of chick lit fiction. Hit the shelves like a cold-front sweeping through a scorching summer of drab, effeminate storytelling. Severed every tie. Squinted every reading eye. Sharp Objects is gaudy, gory, and gorgeous—and that’s just the women.

Camille Preaker is a woman of arcana. Arcana, and uncurtailed vices. Just a nip, she reasons as she takes a sip of vodka. She swears by her Virginia Slims and uses her liquor as lubrication to protect her from all the sharp thoughts that whittle her cloudy brain.

The novel opens with Camille Preaker, Flynn’s debut protagonist, being sent back to Wind Gap, her hometown in boot-heel Missouri to report on the murder and disappearance of two 13-year-old girls, Natalie Keen and Ann Nash. Where your biggest rival is not the football team down the street, a pack of lions safeguarded by one long stretch of Highway 287, but your next door neighbor. Home to a population of drunk fathers and provocatively pliant women, perpetual townies with uncouth children, old money and trash.

“Which are you?” asks Curry, Camille’s father-figure newspaper editor.

To which Camille responds: “Trash, from old money.”

Not one page of Flynn’s debut novel is left unscathed, for you are only mere pages into the book when Camille discovers the tiny body of Ann Nash wedged in the foot-wide space of an alleyway, her brown eyes left deceivably-open, her knees bandaged with bruises, teeth yanked, gums raw and pink. Setting the scene with a serial investigation and roil in your stomach.

If Camille had grown up in Waxahachie, S. College and N. Rogers streets would have been her memory lanes, and every shop along the downtown square a trigger to a forgotten memory. Instead of dining at Wind Gap’s faux maritime-inspired cafe to eavesdrop a few tipsy, stay-at-home-mother conversations in hopes of snagging a good quote, she would have gone to Oma’s Jiffy Burger and ordered two cheeseburgers and a glass-bottle coke, sat at the tin-wrapped bar next to a white-haired man in overalls, the father of an old friend. And probably he would have told her all the answers to her questions, the story written, her job done. Peace out cub scout. Her Friday nights would have consisted of high school football and marching bands and occasional bonfires, not inside a decrepit shed in the dead center of the woods where it seems all teens in Wind Gap go to experience their Firsts and nothing good ever happens.

A local pig slaughtering operation paves Wind Gap’s dirt road-economy, makes the air all thick and gory, a meaty operation that is both immigrant-ran and locally-owned by Camille’s emotionally detached mother, Adora Crellin.

Sweltering through the hog-heat of this slaughterhouse town, Camille wards off her neighbors and nostalgia as if it were poison to her body. Jackie O’Neal—my favorite character—is an ever-tipsy, caftan wearing family-friend who Camille prefers over her own mother, and provides the only sense of comedic relief to the novel. Detective Richard Willis is an outsider from Kansas City who was brought in by local Chief Vickery to work the case of the missing girls.

I am a cutter, you see, Camille says. My skin… [it] screams. It’s covered with words—cook, cupcake, kitty, curls—as if a knife-wielding first-grader learned to write on my flesh.

She wears her past on her sleeves like gaudy jewelry.

Adorns herself in unwanted memories.

The continuous flare of Camille’s scars are like dormant infections coming alive between chapters, and are often triggered by her mother’s palpably cold words.

“The house is not up to par for a visitor, I’m afraid,” Adora blinked as she welcomed her wayward daughter home.

Almost twenty years have past since the death of Camille’s sickly sister, Marian, yet Camille remains blighted with phantom guilt. Her Evian bottles are filled with vodka, her arms scribbled with self-inflicted scars. And Adora remains raw with grief as though her daughter’s grave were still thriving with the first bloom of condolences, Marian’s room a shrine of her last day—a pole with an IV bag stood sentry by her made hospital bed, a violet dress and a pair of white tights smoothed across the comforter—preserved like a mother in mourning.

Adora’s maternal affection becomes so intentionally pointed the longer Camille stays like a visitor inside her pristine home, and by chapter 3, a simple pat on a shoulder could just as easily be mistaken as weaponry.

The only soft touch felt by Adora in this 254-page novel is by the ill-colored skin of her favorite daughter, Amma, Camille’s 13-year-old half-sister.

Amma is a dichotomy of personality, one dark, one light.

At home, she dresses in knee-length skirts and hair bows, spends her days on the front porch playing God over a dollhouse replica of her own home—a toy she refers to as her fancy. In public, she harasses her friends like a Mean Girl with a grudge, pops Opioids like tic-tacs and swallows them down with purloined bottles of vodka kept in soda bottles. She throws toddler-sized tantrums when her dollhouse furniture doesn’t replicate the originals of her mother’s Queen Anne, and simmers with a quieter rage when Adora’s attention coddles anyone but her. Sins wretched as murder in the eyes of this wily little girl—but what else would you expect of a Persephone-idolizing teenager whose role models are martyrs and lives in perpetual competition with a dead sister she never knew?

“I can be nice you know,” Amma tells her big sister.

Punctuating her flashbacks with shots of sarcasm and travel-sized bottles of booze, a nod to her inner Steve Dunleavy, Camille disappears inside a continuous parade of townies and gossip as she narrates the reader through her benderous homecoming: Beaches night with her former cheerleader classmates, turned-table interrogations with the chief of police, sexual escapades with homicide detectives, and one-night-stands with prime suspects, anything for a good story.

This perfectly executed debut novel will not crick your neck with the try-hard ingredients of a typical thriller, nor will it jab you breathless with new takes on old, tired plot twists, creative desiccants and desperate expositions. Gillian Flynn, matron storyteller that she is, drops an arsenal of trauma-bombs throughout the book. Keeps you on your toes.

This story is not so much a Who-Done-It as it is a wickedly wrought narrative exploding with taunt-and-jeer dialogue and plain-sight secrets, Flynn laughing manically as she leaves you to dangle over the edges of pages like cathartic cliffs—like that one time when she chucked a single sentence onto the page about Camille’s rehab roommate killing herself by swallowing a bottle of windex, as if no one would even notice it being there, like a pitiful stain to a t-shirt, something to be glossed over seamlessly and kept hidden from watching eyes.

The blood-thinning mystery of Sharp Objects lies much deeper than the dead and toothless bodies that freshly mar this confederate town. My advice to all readers: You must think beyond the unwanted-Outsider theories and red-herring relatives, through the stench of hog-farm workers that local Chief Vickery assumes are guilty. Passed the stereotypical evidences and dry-county complacency, the intoxicating, often infuriating, secrecies of Camille’s childhood memories.

Read between the lines, use more than your eyes, question every truth, riddle every lie.

Hidden amongst the scars of Wind Gap is a darkly iconic masterpiece. Sharp Objects is a subtle shimmer of domestic suspense like a chill to a spine, or the burn of cold air to a hot lung, a constant pain that keeps you alive, every page a new layer adding to the deeper-cut story of this small-town matriarchy.