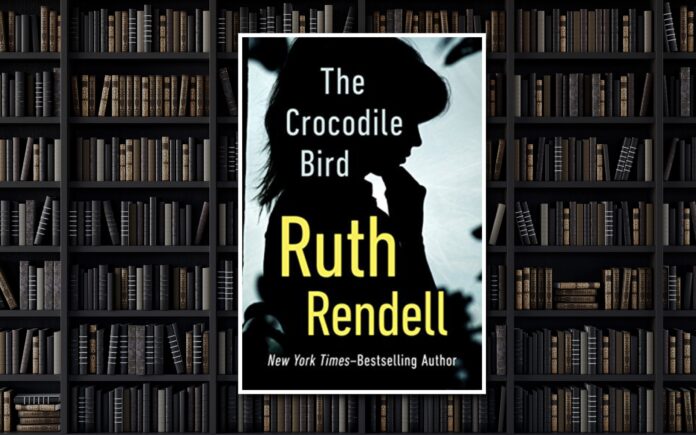 The Crocodile Bird, by Ruth Rendell, 1993

“I’ll tell you from back as far as I can remember. That’s when I was four and that’s when she killed the first one.”

Raised by her furtive but guiltless mother, Liza Beck knew no other world to exist outside that of Shrove House. Cornices crowned with stone, sun-touched walls and slate that glittered with a “dreamy grayness,” countless windows, soaring steps, a haunting of bats and an army of statues standing watch in its alcoves, Shrove House is a Gothic, palace-like mansion set in the heart of an otherwise lifeless moor, isolated as Liza herself. Liza and her mother, Eve, lived in Shrove’s gatehouse, which was also home to every memory Liza had ever made.

The book begins at nine in the evening when “the world began to fall apart” as Eve tells Liza that she will have to leave Shrove House—“for your own protection”—to go away to London all on her own after having spent sixteen years believing the world stopped at the iron gates that barricaded them inside.

“I can’t trust you to tell lies as well as I can,” her mother told her.

Circumstances collided then with an estranged, unmet virginity. It wasn’t all those times she had been locked inside her tiny bedroom and left alone while her mother went to town for groceries, the key kept in her mother’s pocket, a gentle reminder her daughter was safe, or even the time she witnessed her mother sick a pack of Dobermans on a man right there on their front porch, their teeth shining as they tore at the man’s old skin, nipping at the man’s neck, yellow beard caught in open mouths between bites; but “a minute or two after nine on an evening in late August,” that was when the falling apart of things started, and the first time Liza had ever known fear.

Told in retrospect, Rendell’s Scheherazade disobeys her mother’s instruction—probably for the first time ever—and instead of escaping to London, Liza runs off with her lover, Sean. Over the course of one hundred and one nights, Liza and Sean live out of an old caravan barely big enough for a bed and a kitchen sink while she confesses to him her dissenting upbringing, the truth of what went on in Shrove House, and the men her mother murdered who threatened to intervene.

If I had the time or natural attention span to read a book in one sitting, The Crocodile Bird would be an easy thriller to escape into for a day. Testament lies in whoever owned this book before me (I bought it used on Amazon), for the incriminating evidence of Cheeto powder had been smeared on almost every page—that, or the reader had an uncanny addiction to Cheetos. Rendell exceeds every arbitrary standard with her 1993 novel. Macabre but meditative, a slow burning page-turner singed with equal amounts of suspense and warmth. Comparable to Emily Fridlund’s The History of Wolves (one of my top three favorite books, by the way), The Crocodile Bird is as unconventional as it is electrifying.

Whether you order it off Amazon or grab a copy at a local book store, treat yourself to one of Ruth Rendell’s finest classic novels—and don’t forget the Cheetos!