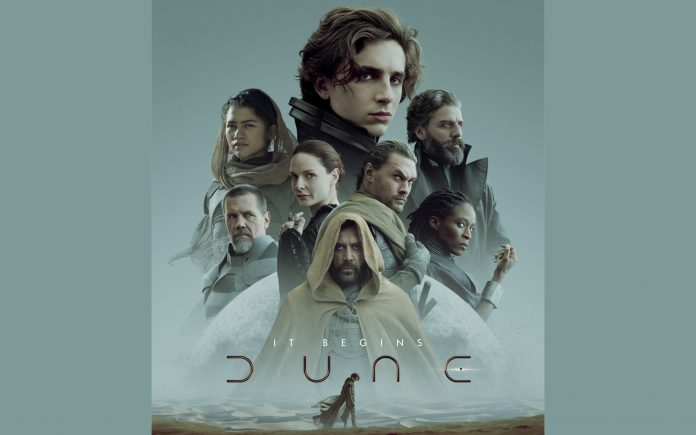 “Dune” is one of those works of science fiction that often gets overlooked and pushed to the side when placed up against bigger titles. However, with its latest adaptation to film, I think people will be flocking to get lost in the world of “Dune.”

In this movie, audiences are taken to the year 10191, when the Padishah Emperor Shaddam Corrino IV decrees the House of Atreides replaces the House of Harkonnen as ruler of Arrakis, a desert planet and sole source of an element called spice. Spice extends human vitality and is critical in the operation of interstellar space travel.

Atreides ruler Duke Leto (Oscar Isaac) is tasked not only with governing the planet but also managing the spice mining operations. Things go from bad to worse as Baron Vladimir Harkonnen (Stellan Skarsgard) attacks to reclaim the planet. Harkonnen’s troops kill Leto and his men, but his son Paul Atreides (Timothée Chalamet) and his mother Lady Jessica Atreides (Rebecca Ferguson) are spared.

Paul has been trained by Jessica, who has passed her special telekinesis abilities onto Paul. In addition, Paul has visions, which he uses to guide his actions. As the palace falls, Paul and Jessica escape the chaos. Following his father’s plans, Paul decides to enlist the help of the native people of Arrakis. If successful, Paul hopes they fight alongside him.

Growing up, the “Dune” series of books didn’t grab my attention. I was more focused on worlds “in a galaxy far, far away” and “boldly going where no man had gone before,” or reading non-fiction accounts of NASA missions like the novel “Lost Moon.” After watching this new adaptation of “Dune,” I am intrigued by the story, the characters, and the vast desert wasteland in which they find themselves. I want to know more about them and the dangers they will face in the future.

Something that struck me about “Dune” is how its elements mirrors the works of English playwright William Shakespeare. The Shakespearean plays with the most in common with “Dune” are “Macbeth,” “Hamlet,” “King Lear,” and “The Tempest.” Common elements include a son avenging his father’s death, Paul carrying his father’s signet ring as did Hamlet, backstabbing royals, the use of witches, a ruler consumed with power, and using prophesies and visions as key points in the narrative. It impressed me how these elements were adapted to create a compelling story that felt familiar at the same time.

The single drawback to this film was its casting. The supporting role choices were great: Josh Brolin as Gurney Halleck, Jason Momoa as Duncan Idaho, and Stephen McKinley Henderson as Thufir Hawat.

However, casting Chalamet as Atreides hurt the film. A strong confident person was needed as opposed to someone who looked they were trying to fight off sleep because they’d been at a late-night rave party.

In critical plot moments, Chalamet just looked like he was ready for the scene to end so he could return to his trailer. As an audience member, I wanted to connect with the character, but that never happened.

“Dune” is a good movie that left a lot on the table. More time needed to be taken in the editing room to keep the narrative focused and the audience engaged. The cinematography is great, but it can’t make up for the plot. This mistake was demonstrated in “Nomadland.”

This movie runs for 155 minutes and is rated PG-13 for sequences of strong violence, some disturbing images, and suggestive material. “Dune” can be seen at ShowBiz Cinemas, 108 Broadhead Road in Waxahachie. Information about showtimes can be found at www.showbizcinemas.com. Additional information about “Dune” is online at www.dunemovie.com.