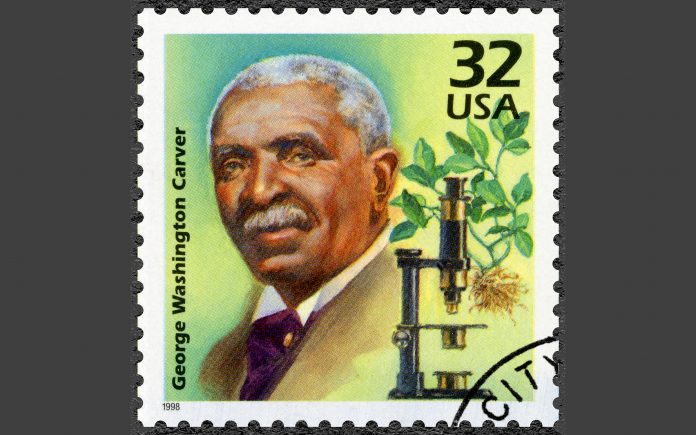 George Washington Carver was an agricultural scientist and inventor who developed hundreds of products using peanuts (though not peanut butter), sweet potatoes and soybeans. Born an African American slave one year before slavery was outlawed, he was raised by the Carvers who owned the farm where he and his mother and brother lived. When his mother was kidnapped, the Carvers raised George and his brother and taught them how to read and write. George was a sickly child who couldn’t help with the work on the farm, so Mrs. Carver taught him how to cook, sew, do laundry and concoct simple herbal medicines.

Even as a young boy, George had a keen interest in plants. He love to experiment with natural  pesticides and fertilizers and became known as the plant doctor. At the age of eleven, he left home to attend school and eventually became the first African American to earn a Bachelor of Science degree.

George devoted his life to finding ways to help farmers produce good crops. He learned that planting cotton in the same fields year after year depleted the nutrients in the soil. He advised the farmers to plant nitrogen-fixing crops such as sweet potatoes, soybeans and peanuts in rotation with the cotton to restore the nutrients to the soil.

This crop rotation idea was just what the farmers needed for their cotton crops, however, there was an unintended consequence – peanuts! The farmers had hundreds of pounds of peanuts, and at that time, peanuts were not considered good to eat or good for anything else.

George Washington Carver got to work and invented over 300 ways to use peanuts. He even went to Washington D.C. to convince the legislators to put a protective tariff on peanuts to protect the peanut farmers. After that, he became known as the Peanut Man.

Mr. Carver’s life was always about helping people. He traveled the South to promote racial harmony and to India to discuss nutrition with Mahatma Gandhi.

He died in 1943 at the age of 78. He was posthumously inducted into the National Inventor’s Hall of Fame.

There is a BrainPOP video about George Washington Carver that your children would enjoy. Click here to view it.