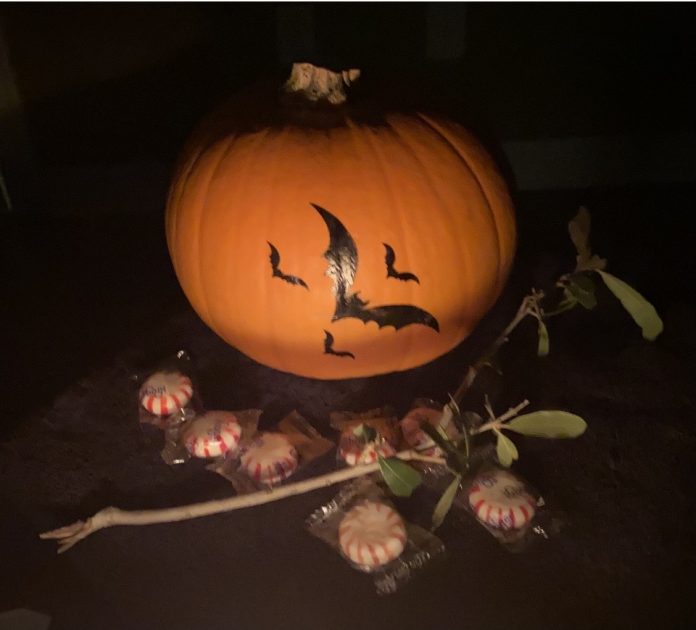 I was 8-years old and my third favorite holiday of the year had arrived.

At that age…I was starkly unaware of the derivation or theological implications of any of the special festive days of the year…I simply judged each one by what was in it…FOR ME!

Thanksgiving placed second in my “kid” hierarchy of holidays. Here is the math…

(Christmas minus Gifts plus No School) divided by (the square root of the circumference of Cranberry Sauce) = THANKSGIVING!

(Did I mention that school was not my thing?)

Which brings me to HALLOWEEN.

As a child, I did not ask a lot of this holiday.

I had only one mission…it was the acquisition and accumulation of massive amounts of CANDY!

Case in point, I put no thought into my Halloween outfit.

In fact, I was the kid that arrived at neighborhood doorsteps and had to EXPLAIN his costume.

I would show up…”Piggly Wiggly” sack in hand…wearing the same outfit I wore to school that day. (Beige, long sleeved turtleneck shirt, paired with Sears & Roebuck brand blue jeans with the “Triple-Reinforced” knees).

I may have started out with a little nondescript face paint when I left the house…but likely sweated it off as I darted and weaved through the neighborhood like a crazed, miniature “Candy Corn” addict.

When curious (concerned) neighbors…prior to conferring their confections upon me…would ask…”what are you supposed to be little boy?”…I would hyperventilate in my best British accent…

This hastily thought out ploy always fell short as my “accent” was far more “Lubbock” then “Liverpool”.

OKAY…I need to stop here for one moment.

In the way of context, this Halloween took place many years ago. it was at a time when parents would send their kids out into the night…unaccompanied…armed only with their wits, worn out sneakers and instructions to…”be careful!”.

And that is how little, sweaty “Paul McCartney” found himself lugging a 10-pound sack of treats through a pitch-dark suburban back alley.

It was the short cut to my “Halloween” home base. I needed to offload my precious cargo before striking out to another nearby neighborhood…purported to have CHOCOLATE!

I was so distracted that I made a “Trick or Treat” tactical error.

I had stumbled headlong into the direct path of a group of BIG KIDS!

Every “little kid” worth their weight in Pop Rocks, knew to avoid these older, overgrown, candy-stealing backstreet bullies.

The biggest, meanest and ugliest one stepped forward and demanded I hand him my overflowing Piggly Wiggly sack.

Choosing my life over that of my Tootsie Rolls, I placed my bounty on the ground in front of me.

That is when…from behind me…I heard a high-pitched, but confident voice proclaim…

There…illuminated by an errant strand of light reflecting off of a galvanized trash can…stood MY BROTHER!

All seventy pounds of him.

The “big kids” momentarily stopped their advance as they pondered why this human twig dared to intervene in their after-hours candy raid.

“Leave us alone or else!”

I didn’t fully know what “or else” implied…but I did know…whatever it was…my skinny sibling was going to follow through.

Unimpressed, our assailants shoved me to the side…while “Mr. UGLY” went for my brother.

In the darkness, I landed against a fence…squirming and flailing against the massive behemoth that had me easily pinned.

Protecting my head, I was just brave enough to peek through my arms and try to sort out the combatants in the shadowy melee.

In what seemed like hours, but was more likely seconds…it was over. The slightly less brazen “big kids”, lumbered off holding a very torn and tattered…yet priceless…brown paper bag.

Conversely, outstretched and laying prone on the gravel and pavement…was the brave little “twig”.

I helped him up. His shirt was torn half off and you could already see a bruise forming on his forehead.

“I guess we showed them.”

What? What was he mumbling about? We had just been beaten and robbed and my heart was still pounding in my chest.

That is when he gave me a crooked painful smile…gazed down…and opened up his scrawny clenched hand to reveal his prize.

Miraculous evidence that he had extracted one small victory from his battle against the forces of evil.

Albeit, our monstrous middle-school muggers were probably unaware…but they had just lost their battle with what they assumed was an “easy target”.

Because…In their quest to conquer the weak…they had only strengthened a brotherly bond and gave me an opportunity…early in life…to witness an example of what it meant to “stand your ground”…no matter the odds.

None the worse for wear…that spindly boy and I, walked back home together that night. We hummed the parts we knew to “Let it be” and laughed about what we were going to tell our parents.

Decades have passed since that harrowing Halloween night. I still like candy…and…like many of us…chocolate is still my favorite.

However, here in Ellis County, if your children drop by my house on Halloween and I am handing out peppermints instead of “the good candy”…please forgive me.

Those small, ordinary peppermints…are the greatest “gift”…I have to give.