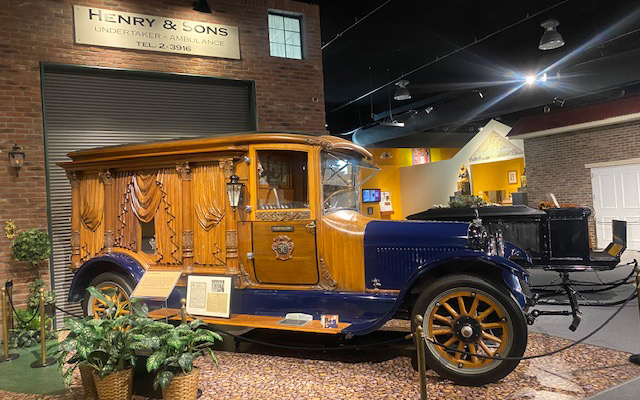 Lines of hearses greeted us as we entered the National Museum of Funerals in Houston, Texas, but we resisted the impulse to rush in their direction and, instead, followed the map carefully to head towards the section on presidential funerals. The first room honored George Herbert Walker Bush with a sobering film of his coffin’s train ride to College Station followed by his procession down a cadet-lined road to the Bush Library and Museum. The presidential funeral area covered information about presidents from George Washington to Ulysses Grant to George Herbert Walker Bush with extended displays on Bush, Kennedy, and Lincoln, including Lincoln’s wax figure lying in state.

Abraham Lincoln’s impact on mortuary science was important because he encouraged embalming so bodies of soldiers killed in the Civil War could be returned to their families in a manner in which they could be positively remembered. His desire to reunite families with the bodies of their lost ones gave rise to new techniques of embalming, many of which were used until the 1960s. (One of our unanswered questions was, “What changes happened in the 1960s?” The research we did later indicated that the rise of cremation changed funerals tremendously.) 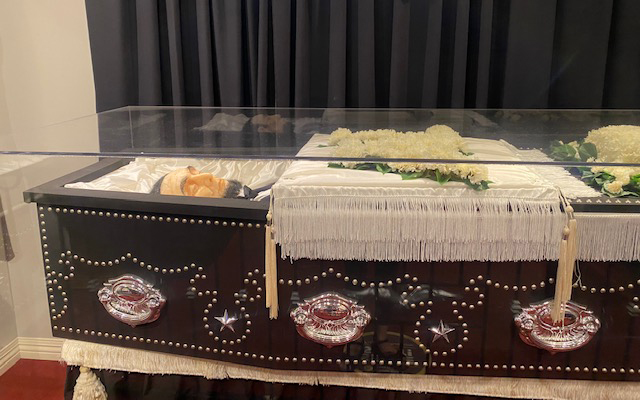 Another section highlighted famous people who have died including comedians, actors, journalists, astronauts, scientists, and even famous animals such as Mr. Ed. Some people are immortalized in videos and audio clips while others may have posters or simply their newspaper obituaries as reminders. One very interesting display teaches about the actor Meinhardt Raabe who is famous for his part in the Wizard of Oz as the munchkin who announced, “As coroner, I must aver, I thoroughly examined her. And she’s not only merely dead, she’s really, most sincerely dead.”

One of the largest sections of the museum is dedicated to the deaths of popes and the rituals involved in their passing. Lifesize wax figures show the guarded pope lying in state before he is put into the traditional three caskets. The body of the unembalmed pope is first placed in a cypress coffin, showing that the pope is a common man. This coffin is then placed within one made of lead to show durability. This coffin is sealed shut and placed within a coffin made of elm or oak to signify the dignity of the pope. This coffin is sealed with gold nails before being placed in its final resting place. The exhibit, a collaboration with the Vatican, gives insight into the funeral rituals of these special people. 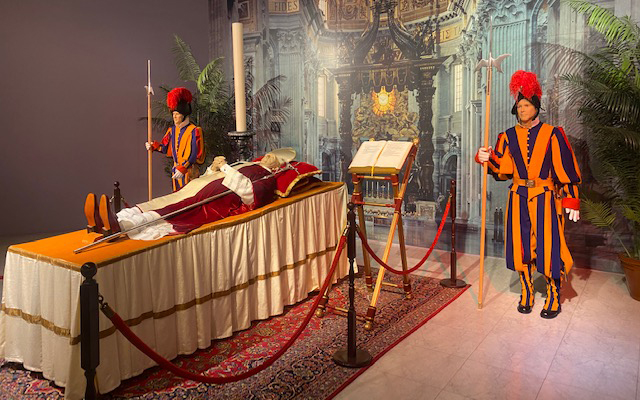 In addition to a display showing how caskets are made, the museum displays many hearses, dating from the 1800s to the present. It even shows some of the history of embalming and funeral rituals, such as those of ancient Egypt, but it doesn’t mention the Viking cremation ceremonies that were of interest to us. A few international funeral rites are mentioned such as Mexico and Japan. Ghana is highlighted for Kane Quaye‘s caskets that he carved in the shape of various animals and items to reflect the interests of the person being buried. (We would have liked to see more international rituals and different rituals of indigenous peoples, but the size and magnitude of the museum, the largest of its kind in the US, is amazing.)

We saved the Jazz Funerals display for the last—an uplifting way to address devastating loss.

So why does this museum exist? It was built in conjunction with the Commonwealth Institute of Funeral Service and was based on the idea of Robert L. Waltrip to establish “an institution to educate the public and preserve the heritage of death care.” The 35,000 square foot museum features 17 permanent exhibits and a list of temporary exhibits.

My husband and I spent almost 2 hours exploring these exhibits and the gift store that approaches funerals and death with a tongue-in-cheek attitude and is a fun break from the more sobering aspects of the museum.