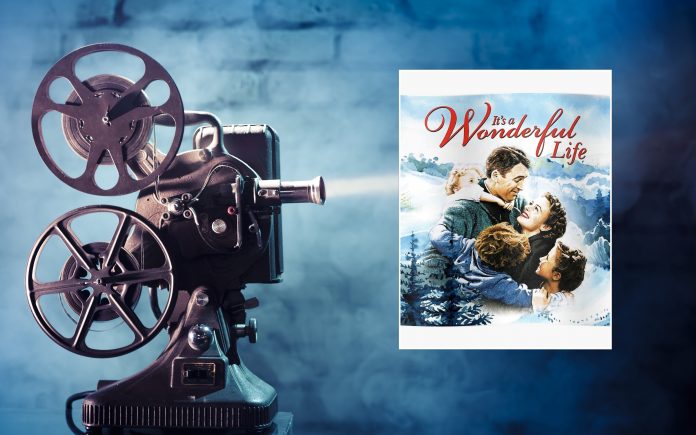 This is my FAVORITE Christmas movie and in my top 5 of ALL TIME!!

I started my very own Thanksgiving tradition by watching “It’s a Wonderful Life”, every Thanksgiving evening when all the dishes had been done and bellies were full. It all started over 2 decades ago when I was married to my first husband and my sons were too little to argue with me about sitting through this old black and white classic that has a run time of 2 hours and 15 minutes. Now, that husband I think only granted my yearly wish maybe twice, (over 14 years of marriage) but both boys would watch every year, sometimes they scoffed, other times they would sit with me and partake in my love for this timeless film, maybe because I had a pitiful look on my face because I was watching it alone, or maybe they could see the importance in this movie like I do.

Now that they are older, we don’t watch it together as much because divorced families have many Thanksgivings to attend and sometimes we are not all together when the opening scene starts. Sometimes, I’m lucky enough to have everyone together, my current husband, (who is willing to watch it as many times as I want) both boys and the oldest one’s fiancé. I don’t count on this every year, but I still watch it just as I have for the last 26 years, even if I’m having to watch it alone.

It’s a Wonderful Life, staring Jimmy Stewart, Donna Reed, and Lionel Barrymore and directed and produced by Frank Capra was released in 1946 and is considered a drama/fantasy. It’s rated PG. It’s not your usual Christmas movie, there’s not the usual focus on Santa, instead, its focus is on a regular guy who has dreams of becoming something big, right after he travels the world, and that guy is George Bailey.

When the movie opens, you hear many people praying for their friend, his children praying for their father, his wife Mary praying for her husband, his mother praying for her son, in fact the entire town is praying for George Bailey. Then you hear the voices of 3 angles talking about this problem and that it’s the crucial night of George Bailey, who wants to throw away Gods greatest gift, his life. Joseph, the head angel decides to send “someone” down to help George. Clarence, an angel, that carries around the book “The Adventures of Tom Sawyer” with him at all times, who is as sweet as sugar, but a bumbling soul finds out that he is next in line and if he helps George to forget about suicide and helps turn his life around, he will in fact finally receive his long awaited wings!

George Bailey was a young man, living in the small town of Bedford Falls and from an early age, he wanted to get as far away from Bedford Falls as he could, he wanted to travel the world, and accomplish big things…planning cities, building airfields, skyscrapers, and bridges. But even as a young boy, something always seemed to happen that would keep him from leaving his hometown. He once saved his little brother from drowning in freezing water while their group of friends sled down hills of snow and ice, his brother Harry broke through the ice and George jumped in to save him, while in the frigid water he caught an awful cold and lost his hearing out of his left ear.

As he grows up, he plans on starting on all of his adventures after he finishes college. George Bailey has a tremendous amount of respect for his father who owns and runs the Bailey Building and Loan, which is the about the only thing that Mr. Potter, the villain, (every movie has one) doesn’t own and Potter doesn’t like that one bit, he is always trying to get his hands on it somehow, so he can take away the one hope the town of Bedford Falls has in living in something nice rather than in a dump like the ones Potter owns. His father wanted George to take over the family business at some point but George had no interest. But as fate would have it, his father has a sudden stroke and dies and George is forced to stay and keep the Building and Loan going so Potter doesn’t have the chance to get his hands on it, and he sends his brother to college instead.

Eventually WWII comes and goes, and his little brother Harry served, winning the Congressional Medal of Honor because he shot down two planes before they crashed into a transport ship saving every man on board. George couldn’t serve due to his hearing loss, just another way for him not to be able to leave Bedford Falls.

So many of those events always seemed to stack up preventing George from pursuing his happiness. By the time George had his own family, a wife and 4 children, a mortgage and bills that seem to keep piling up, and barely being able to keep the wolf from the door, the final straw seem to break when his Uncle Billy seemed to lose the $8000 deposit for the building and loan, and to make matters worse, Mr. Potter was the one who found it, never to return it. When the bank examiner discovers the shortage later that night, George realizes that he will be held responsible and sent to jail and the company will collapse, finally allowing Potter to take over the town. Thinking his wife, their young children, and others he loves will be better off with him dead, he contemplates suicide. 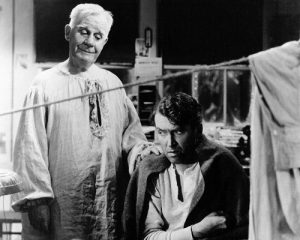 Now all those prayers that everyone sent up to the heavens were heard and just as George is about to jump into the frigid river and drown, Clarence comes down and jumps in the river himself, making George save him. After saving Clarence and getting him up to the toll-takers shack, they sit there by the wood burning stove and let their clothes dry. Clarence explains that he is an angel, “Clarence Oddbody, Angel second class”, and that he was sent to save George from committing suicide. To George’s astonishment, Clarence knows the whole story of his life. Of course, George is disbelieving about the whole thing, and convinced that Clarence must’ve gotten into some bad liquor. George finally announces that “he wished he had never been born.” Clarence formulates his plan, and, after a little prayerful communication with Joseph, he says “You’ve got your wish. You’ve never been born.”

Quickly, the snow that was falling fast has now stopped. George can now hear out of his left ear and their clothes are completely dry… Now as he heads back to find his car and get back home, he doesn’t find things like they should be, in fact nothing is like its supposed to be, it’s not even Bedford Falls anymore, but Pottersville. After retracing his steps, no one seems to know him. He finds himself at the cemetery where the headstone of his brother Harry reads that he passed as a child. He argues with Clarence telling him that Harry didn’t die… Clarence says, “Your brother Harry Bailey broke through the ice and was drowned at the age of nine.”

After he realizes that Clarence is telling him the truth and that none of his family exist he finds himself back on the bridge where he went to jump in the first place… when suddenly he prays to God, begging him to let him live again, asking Clarence for help and telling God he wants to live no matter what, he just wants to get back to his wife and kids. Suddenly, it’s snowing again, and he is back where he is known and loved and being looked-for all-over town. 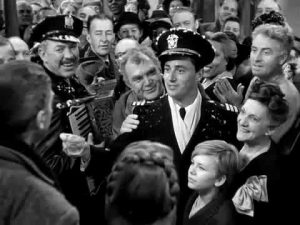 When he gets back home he finds that things are fixing to change again, his wife Mary had been out telling everyone that George was in trouble and soon the $8000 he was missing turns into much more than he could have ever wished for, because everyone from the town has rushed over to help, bringing cash, coins, anything that they could donate to help George with…Now, my most favorite part of the whole movie is when his brother comes through the front door in full uniform and announces that he flew all the way home in a blizzard just to get home to his brother because he needed his help.

With what seems like the whole town in George’s living room, someone breaks out wine and his brother decides to make a toast saying… “To my big brother George, the richest man in town”! George’s posture seems to straighten, and his demeanor seems to have purpose unlike any other time during the movie.

In the last scene, as the whole crowd sings “Auld Lang Syn” George notices the book “The Adventures of Tom Sawyer” laying on the pile of cash with a brief handwritten note on the inner pages that says, “Dear George, remember no man is a failure who has friends. Thanks for the wings! Love, Clarence.”

Now if you have seen this movie, you know that I am leaving A TON of important events out….I mean TONS….but it is well worth your time to watch it again, and if by some ludicrous chance you haven’t seen it, please, please do yourself a favor and watch it.

I always hoped that my sons would see what I see in this movie and that is, no matter how tough life seems to be, no matter what obstacles you’re up against, that your family is there for you. When Harry says to the crowd… “To my brother, the richest man in town”, he didn’t mean because there was piles of cash on the table in front of his brother George, he was referring to the houseful of friends that came to his need, just because he was a good human being.

I was told once by a very bitter man that having friends was a liability. What???? I had never heard anyone say or believe such craziness before … I raised my sons to be kind to everyone, how to stand on their own two feet and to lean on each other when they needed to, and I pray that they are never bitter like the man they have in common. They both have friends, buddies who are more like family, they are both a part of a comradery, and they both love each other, even if at times they don’t act like it… they each know the other to be the richest, because they both have traits the other finds positive and commendable yet differences that make them who they are… they are two men who know how to make their dreams come true.

It’s a Wonderful Life is about divine intervention at its best, when a man who always dreamt of being elsewhere because he thought life would be better, when God had him exactly where he was needed…making a difference for everyone who knew him. 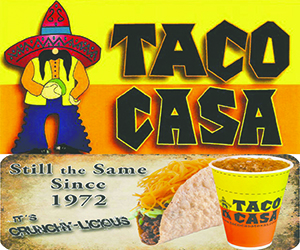