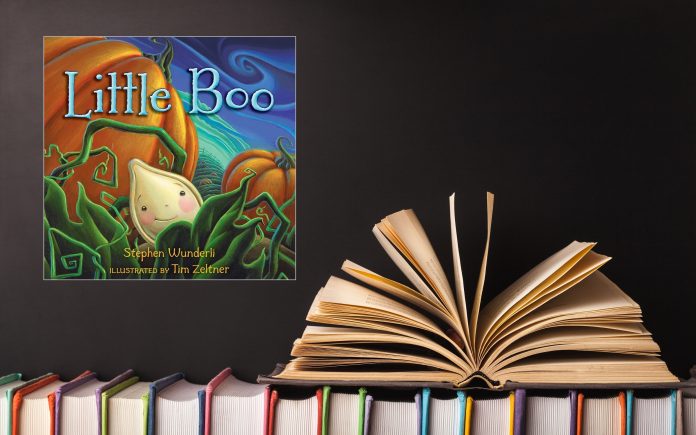 Little Boo is the perfect book to go along with your pumpkin activities. It is the story of a little pumpkin seed that tries and tires to be scary, but he doesn’t scare anyone. He tried to scare a leaf, a grub worm, and a snowflake, but the wind told him to be patient and blew some soil over the seed to keep him from the cold. The little seed finally just went to sleep.

It was a very long sleep, and when he awoke, the air was warm above him. He reached and reached until he could feel it, and then he decided it was time to get back to scaring. Still none of his scaring efforts were working.

In the meantime, he had been growing and was now a little plant. “Now!”, he thought. “I can be really scary.” The wind told him, “Not today, but soooooon.”

Eventually, Little Boo turned into a big orange pumpkin. “Boo!” he said to the hands that picked him, but they weren’t scared.

Later, as darkness crept in above the trees, a single candlelight appeared in the night. “BOO!”  said the little pumpkin that was now a jack-o-lantern. He scared the cat and the goblins. Finally, Little Boo was scary, and the light from his grin flew over the trees and spread across the night!