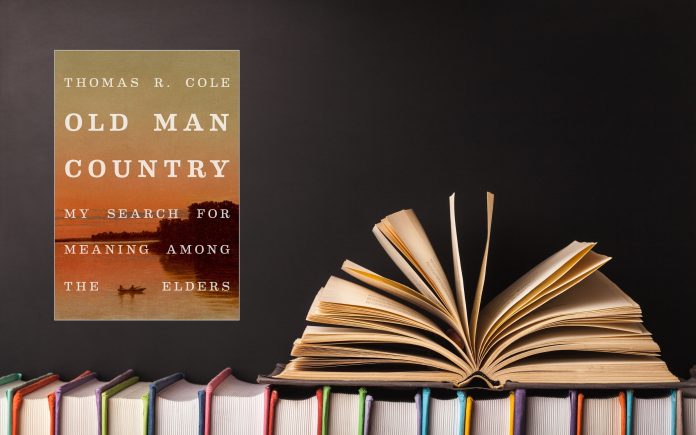 At 72 years of age I am certainly closer to the tomb than the womb. Although death may not be around the next corner, it’s not down an endless highway. So, what is ahead in this final phase of my odyssey? The book, Old Man Country by Thomas R. Cole helped me better understand the next leg of my journey.

The first twenty pages of the short book (169 pages total) gives an overview of Cole’s life:  His father’s suicide at age 4, the demanding mother and her contemptuous second marriage, college education at Yale and his academic and personal captivation with aging. Old Man Country deals with the Fourth Age; the time of life after 80 years of age.

To relate the feeling and fears experienced by people 80 and over, Cole interviewed 12 men of renown to capture their inner most thoughts in four categories: am I still a man, do I still matter, what is the meaning of my life and am I still loved?

In the first section, Cole affirms that interviewing 12 men and no women is not misogynistic. He states, “I seek, of course, to reclaim and enhance the humanity of old women as well. That is another project, well underway, thanks to scholars, activists, artists and the sheer force of example.” Interesting enough, in almost all the men examined in the book, women play a major role in their lives whether it was Hugh Downs happily married for 73 years, to George Vaillant, the long-time president of Harvard who has been married four times.

The book highlights the diversity of lives which make up the best and brightest of their generation like Dr. James Floyd, pastor of one of the largest Presbyterian congregations in the U.S. or Dan Callahan, the “father of bioethics” who rankles society with the views that life for the aged should not be prolonged.

There are several who lack the spiritual strength to be content in their old age and others who feel blessed they soon will be among a divine presence. The 12 in the Old Man Country will surprise you. There are some who you may picture as having great fortitude because of their accomplishments and yet they are resigned to just wither. Others who worked behind the scenes instead of the spotlight still show their humble resolve to make a difference in their Fourth Stage of life.

Old age exposes the flaws of men who for 70+ years had displayed brilliance. The elite of science are now befuddled. The stars of finance have faded. The brilliant teachers no longer hold court. And yet, each of the men interviewed maintained a dynamic, a powerful presence, even though their mind and body were in decline. There are commonalities between what they were and what they were becoming. The beauty and bounty of the book is how distinction is defined in the before and after.

One such man is Walter Wink, a noted theologian whose 16 books and hundreds of scholarly papers portrayed a humanistic view of Jesus Christ and His teachings. Later in life, Reverend Wink suffered from RLS, a nervous system disorder. He was prescribed a drug which was subsequently found to cause deep depression.

That life-threatening dependency resulted in his declaration “… the deeper I slipped into darkness, the less I cared about God.” When the pharmaceutical company was sued for the toxins its medication contained, Wink was taken off the drug. Slowly, even with what was becoming acute dementia, Walter Wink returned to his deep religious beliefs. This battle to live your final stages with dignity and self-worth is a constant in many of those interviewed.

Every one of the 12 men had built an eminent reputation in their particular field of endeavor. They had earned respect for the difference they had made. The book does a marvelous job of discovering whether the featured people strived to maintain their celebrated status or were willing to find other ways to redefine their existence. Or, with some, simply die.

I am less than a decade from the Fourth Age. Although I am still working in the same profession which has validated me for more than 50 years, I have already begun to plan for my life after 80. Old Man Country has helped dramatically.

My life’s work has been developing strategic plans; the art of creating a blueprint to help organizations and companies reach goals they set over the next ten years. Therefore, it seems natural for me to set a strategy for myself as I glide into old age.

I have been blessed with a loving, devoted wife and good children who are raising our amazing grandchildren. My first goal is to preserve those strong and loving ties. To grow old and be loved is to remain young and alive.

I have also been enriched by wonderful friends to whom I will always be devoted. Still, another key aspiration is built on the Maslow Hierarchy theory of finding serenity; the state of being where you are content of where and who you are.

Old Man Country helped me clarify and confirm my old age strategy. The book is difficult, in parts, to read because you see some respondents going through illness, dementia, depression and loss of dignity. But the wonderful outcome is understanding how they fought through the haze and have seen the light. It is a journey in which all 12 men know that in the end there will be another bright light of salvation to follow.