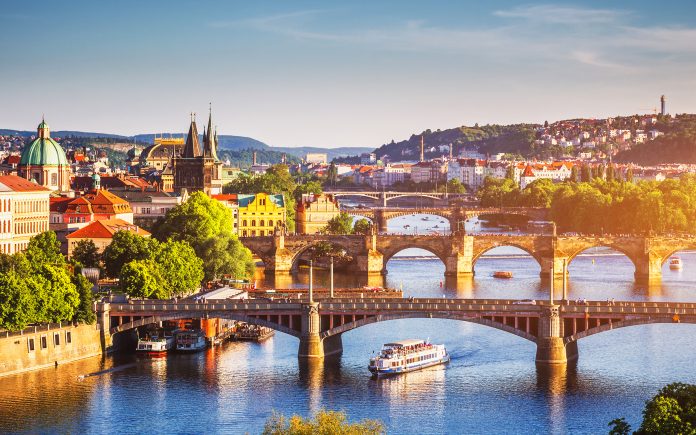 Prague is a dream destination that highlights more than one hundred synagogue and church spires. The city houses the Old Town, a UNESCO World Heritage Site, and great restaurants. 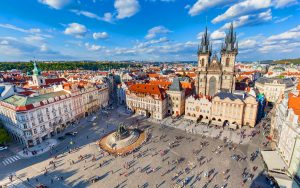 Our walking tour of the Old Town gave us time for a cup of coffee to watch people and the 600 hundred-year-old Astronomical Clock which comes alive every hour with its Walk of the Apostles. This stop was followed by a visit to the Prague Castle, the largest castle complex in the world. (I found out what the difference is between a castle and a palace. A castle is a large building or group of buildings surrounded by thick walls, while a palace is the official residence of some special person, so a castle can have many palaces within its walls.) The Castle Complex also gives visitors a beautiful overlook of the city below. 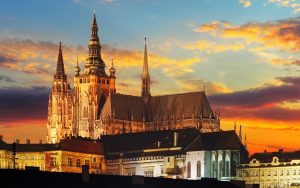 Inside the Castle complex is the St. Vitus Cathedral where St. Wenceslas is buried. (Think of the Christmas song, “Good King Wenceslas.”) We also visited the Lobkowitz Palace where we experienced a concert, ate lunch, and viewed the museum filled with paintings and original manuscripts by such composers as Beethoven, Haydn, and Mozart. The museum had something for everyone with an impressive collection of military weapons. Interestingly, the palace is family-owned, and they maintain it by opening to the public. (Can you imagine how much it must cost to maintain a palace?)

Lovers of the macabre should make certain to see the window that was the site of the 1618 defenestration that sparked the Thirty-Year War. I didn’t know what this word meant so, thankfully, Google came to the rescue. Defenestration is execution by throwing someone out the window, just in case you ever need this word. There were two other defenestrations, one in 1419 and the second in 1483, but the third is much more infamous. 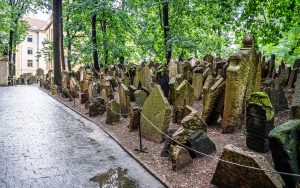 Our walking tour took us through Jewish Prague which was a sobering reminder of the results of hatred and prejudice. The Pinkas Synagogue is the Old-New Synagogue with its walls covered with almost 80,000 names of the Jews who died in the Holocaust. Next to the synagogue is the Old Jewish Cemetery which was used from 1439 to 1787. No cemetery expansion was allowed, and graves could not be dug up, so tombs were placed on top of each other, up to 10 feet deep! There are over 12,000 headstones and perhaps 100,000 people buried in this small space. 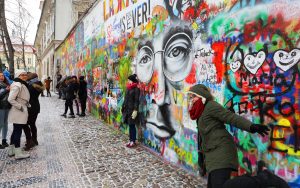 Another interesting stop on our walk was the Lennon Wall, a graffiti-filled wall that began shortly after Lennon’s death in 1980. The art began with a painting of Lennon, but the wall quickly became a forum for protesters and Beatles lovers alike. Through the years the Knights of Malta, who own it, tried to stop the graffiti but finally gave in and allowed the wall to be painted on by visitors (but only in specified places). Our guide provided markers and showed us where we could draw without breaking the law.

In addition to graffiti, art takes many other forms in Prague including such as unusual sculptures including two that stood out for me. The statue of Kafka, the author, on the shoulders of a giant, empty suit stands near his family home in the Jewish Quarter. Large statues of babies by Cerny are also interesting sights, especially since they are in the beautiful Kampa Park in front of the museum by the same name.

Prague is home to so many museums, restaurants, and historical sites that a visitor could spend a week and not see everything. Are you planning a trip to Prague and have a question you’d like answered? Have you visited Prague? If so, please share some of your favorite things to do. 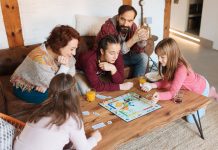 Flexible Thinking In An Uncertain World 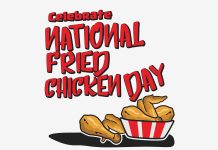 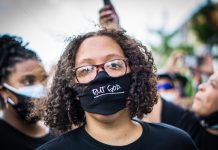 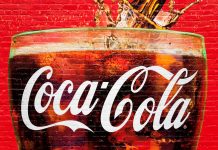 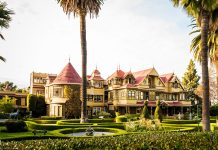 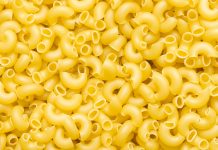