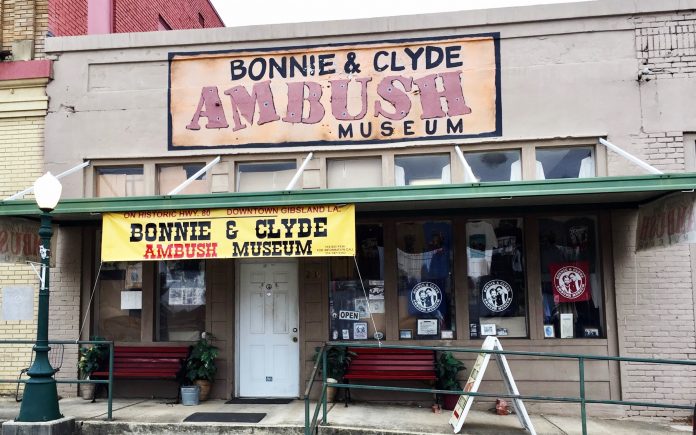 On that fateful day of May 23, 1934, the feared couple known simply by their first names, Bonnie and Clyde, were killed by six lawmen in an ambush between Gibsland and Sailles, LA, thus ending a reign of terror that extended through Texas, Oklahoma, New Mexico, Louisiana and other states.

Boots Hinton, son of Terry Hinton one of the lawmen present on that memorable day, opened the Bonnie and Clyde Ambush Museum in 2005 to commemorate the occasion. The museum is now owned by Perry Carver who met us as we entered the hard-to-miss site. The large, bullet-ridden sign over the door foreshadows the violence held within the building. The museum is in the building that was once Ma Canfield’s Café where Bonnie and Clyde bought what turned out to be their last meal—a fried baloney sandwich and a BLT. 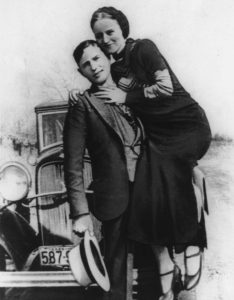 Our visit started with a 12-minute black and white documentary about Bonnie and Clyde.  It gives a brief history of their lives and of the ambush that ended them. Footage of their funerals is also included in the documentary. The movie is shown in a room with walls covered in Bonnie and Clyde memorabilia, some real and some of movies about them. A copy of Clyde’s death certificate shows Palmer, TX, as the birthplace of his father. (Just a side note: My grandfather grew up in Palmer and knew Clyde.) Clyde himself was born in Tellico, near Ennis. Some older residents of the area remember being hidden by their parents when Bonnie and Clyde were in the area.

The museum contains the stories of Bonnie’s and Clyde’s lives, as well as stories about others in their gang, some of whom I had never heard of. Clyde’s older brother, Buck, was killed in a raid by law enforcement in Platte City, MO. Buck’s wife, Blanche, was incarcerated after Buck’s death, but, after serving her sentence, she led a quiet life. One of the Barrow gang members, Henry Methvin, was actually the catalyst for the ambush. Methvin and his father gave law enforcement information as to where Bonnie and Clyde could be found on May 23, 1934, in exchange for a pardon.

The Bonnie and Clyde Ambush Museum provides a lot of information in a little space with walls covered with information and pictures. Information and news clippings show bank and gas station robberies, car thefts, and the killing of multiple police officers. A replica of the bullet-ridden car holds a place of honor in the museum. The car holds bloody mannequins of Bonnie with her head on Clyde’s shoulder as they were found after the 150 bullets left the officers’ guns. The small room adjacent to the car holds very bloody mannequins laid out in a coroner’s room. (I would not advise taking small children to the museum.)

Bonnie and Clyde’s relatively short reign of terror, about 21 months, was brought to an abrupt, though not unexpected, end on May 23, 1934. Bonnie, herself had penned the poem, “The End of the Line.”

“They don’t think they’re too smart or desperate,
They know the law always wins;
They’ve been shot at before,
But they do not ignore
That death is the wages of sin.”

“Some day they’ll go down together;
And they’ll bury them side by side,
To a few it’ll be grief—
To the law a relief—
But it’s death for Bonnie and Clyde.” 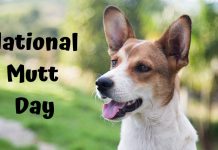 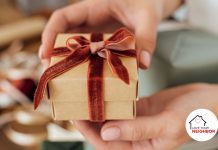 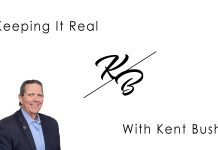 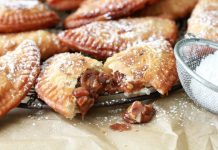 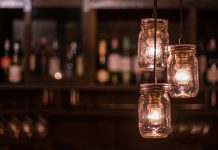