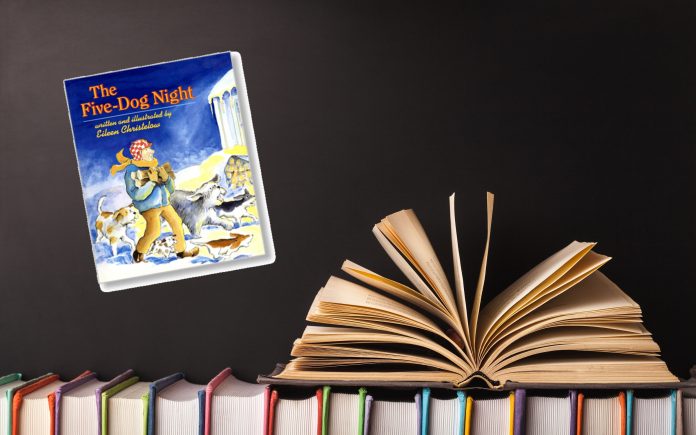 Ezra lived alone in a small house on top of a high windy hill. Well, he wasn’t exactly alone because he had five dogs to keep him company.

Old Betty, as Ezra called her, lived half-way down the hill. Betty would climb up the hill frequently to check on Ezra. When the weather started to get chilly, she told Ezra he would need an extra blanket. He told her he didn’t need blankets. She thought Ezra was stubborn, and Ezra thought Betty was nosy.

As the weather got colder, Betty continued to tell Ezra he needed some blankets. Ezra refused the blankets saying it was only a one, two or three- dog night. Every night as Betty piled on more blankets, she worried that Ezra would freeze to death. One morning she looked up the hill at Ezra’s house and was alarmed that there was not smoke coming out of his chimney. Fearing the worst, she drove up the snowy hill to check on him.

He was snoring happily with a “blanket” of five dogs on his bed. He called her a nosy old busybody, and she said she wouldn’t check on him ever again because he was an old grouch, and she didn’t.

Weeks went by and the weather turned warmer. Ezra and the dogs were feeling rather gloomy. It was too quiet and nobody ever came up the road to visit. Finally, Ezra knew what he had to do. He baked some cookies, put on his best shirt and walked down the hill with the dogs trailing after him.

When they got to Betty’s house, they were greeted by five dogs coming out of Betty’s gate. Betty said they were better company than some people she knew. Ezra said it’s getting warmer, and Betty said, “It certainly is. Last night was only a one-dog night.”

This is a cute story and the illustrations are lovely. It’s a perfect bedtime story book on a cold winter night!

Written and illustrated by Eileen Christelow