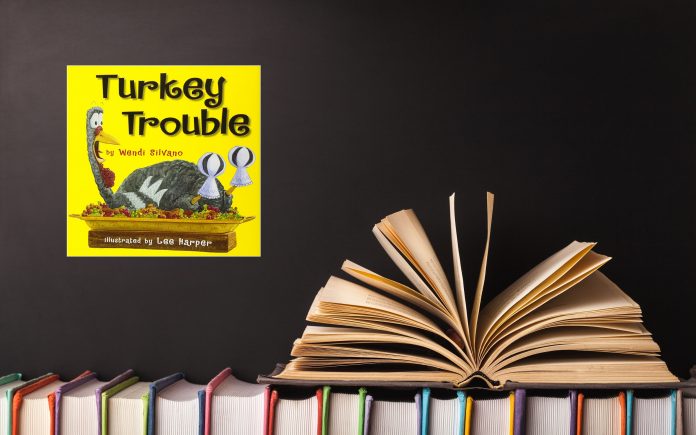 What if Thanksgiving was just around the corner and you were the main course? That is the dilemma that Turkey has in this cute picture book, Turkey Trouble, but Turkey had a plan! He thought that if he didn’t look like a turkey, Farmer Jake wouldn’t recognize him and he would be safe.

Turkey disguised himself as a horse because he didn’t think Farmer Jake would eat a horse. He looked just like a horse…almost. The cows told him he was too short.

He put on his cow outfit, but the pigs said he was too skinny. He tried to look like a pig, but of course, he was too clean.

Turkey tries many other disguises, but none seem to be right. He is really getting nervous because Thanksgiving is fast approaching. What can he do?

As he was hiding in the garden full of peppers, onions and tomatoes, he had an idea for the perfect disguise – a pizza delivery man. “Ding Dong!”  Farmer Jake and his family sure did gobble up that pizza, and Turkey had his best Thanksgiving ever!

This is such a cute story and the illustrations will make you laugh. It is a read-aloud book, but also one that even young children could “read” to you!