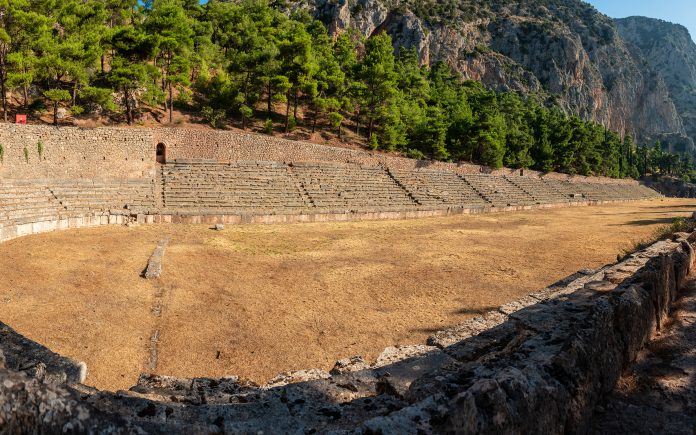 The ancient Olympic Games date back to 776 BC in Olympia, Greece. They were held every four years and became one of the central rituals in Ancient Greece. But the games had rather humble beginnings. The first Olympics in 776 BC had only one event, the stadium race. This was a footrace of about 210 yards, or about the length of two football fields. For the next twelve Olympiads, the stadium race was the only athletic event of the Olympic Games. A medium-distance race and a long-distance race were then added. And it wasn’t until 708 BC, at the 18th Olympic Games, that other non-running events were introduced. For about 1,200 years, the Olympic Games continued uninterrupted, held every four years, until 393 AD, when Emperor Theodosius I called for a ban on all “pagan” festivals.

Here’s what Paul wrote in 1 Corinthians 9:24-27: “Do you not know that in a race all the runners run, but only one receives the prize? So run that you may obtain it. Every athlete exercises self-control in all things. They do it to receive a perishable wreath, but we an imperishable. So I do not run aimlessly; I do not box as one beating the air. But I discipline my body and keep it under control, lest after preaching to others I myself should be disqualified.”

When Paul’s readers read those words, they immediately connected with his analogy. Some of them may have actually competed in the Olympic Games, or perhaps the Corinthian Games. They would have instinctively understood his analogy to running a race. Or perhaps some of his readers had attended the Olympic Games or the Corinthian Games as spectators. But certainly most of his readers, if not all of them, were at least familiar with these competitions, and would have understood his reference to running a race.

Some of you reading this may be runners. You connect instinctively with what Paul is saying in these verses about athletes exercising self-control, about running with purpose, and about disciplining your body and keeping it under control.

Others reading this are not runners. But you’ve attended athletic competitions―maybe to watch your kids or grandkids―or you’ve at least watched the Olympics on TV, so you understand Paul’s reference to running.

But what exactly is it that Paul is encouraging his readers to do? Look back at verse 24. “Do you not know that in a race all the runners run, but only one receives the prize? So run that you may obtain it.” Is Paul saying, “Hey, you guys need to go enter the Corinthian Games and run the race so that you can win the prize”? No, because in the very next verse he says, “They do it to receive a perishable wreath, but we an imperishable.” He’s clearly not talking about running an actual footrace, because he contrasts the wreath that the champion runner wins with an imperishable prize that he is encouraging his readers―including us―to pursue.

Paul is using the same technique here that Jesus often used when He taught in parables. He is taking something concrete with which his readers are familiar―in this case running a race and winning a prize―and using it to teach a spiritual lesson that goes far beyond the physical elements of the parable, story, or analogy.

So let’s look at this “Parable of the Footrace” (as we might call it), and see if we can find the answers to three questions that are raised by the text.

In Hebrews 12:1-4, the Hebrews writer used a similar analogy to describe the Christian life. “Therefore, since we are surrounded by so great a cloud of witnesses, let us also lay aside every weight, and sin which clings so closely, and let us run with endurance the race that is set before us, looking to Jesus, the founder and perfecter of our faith, who for the joy that was set before him endured the cross, despising the shame, and is seated at the right hand of the throne of God.”

There are several things we need to notice from these verses.

If you show up at the Midlothian High School football stadium to run the 440, and the track meet is at Lumpkins Stadium in Waxahachie, you’re chances of winning that race are zero, zip, zilch, nada―no matter how hard or fast you run, no matter how much endurance you exhibit, and no matter how much passion you put into your running. There’s no way you’re going to win that race, because you showed up at the wrong stadium! You’re running on the wrong track.

We have to run the race that is set before us. It matters what race you are running. It matters what direction you are going. It matters where you show up. So, in our Christian lives, how do we know where to show up? How can we make sure we’re in the right race, on the right track? That’s an important question, because Jesus said in Matthew 7:13-14 that, if you’re on the wrong path, you’re going to end up in the wrong place. “Enter by the narrow gate. For the gate is wide and the way is easy that leads to destruction, and those who enter by it are many. For the gate is narrow and the way is hard that leads to life, and those who find it are few.” I don’t want to be on the easy road, because it leads to destruction.

So maybe that’s the first clue. The Christian life―the race we are running―is not supposed to be easy. Paul told Timothy in 2 Timothy 3:12, “Indeed, all who desire to live a godly life in Christ Jesus will be persecuted.” Jesus told His apostles in John 16:33, “I have said these things to you, that in me you may have peace. In the world you will have tribulation. But take heart; I have overcome the world.” And listen to the words Jesus spoke in the Sermon on the Mount in Matthew 5:10-12. “Blessed are those who are persecuted for righteousness’ sake, for theirs is the kingdom of heaven. Blessed are you when others revile you and persecute you and utter all kinds of evil against you falsely on my account. Rejoice and be glad, for your reward is great in heaven, for so they persecuted the prophets who were before you.”

Biblical moral values are coming under attack more and more in our society. The things that we believe to be true based on Scripture are reviled and despised. Evil is called good and good is called evil. If this trend continues, the day may come during our lifetime when assembling to worship the God of the Bible is an actual crime; when simply preaching that marriage is the union of one man and one woman is criminalized as hate speech.

Already there are people who have lost jobs, and friends, and reputations, and employability, simply because they openly confess a belief in Jesus Christ and His teachings. And that’s no longer happening exclusively in other countries. It’s happening right here in the United States of America.

And I guess it really shouldn’t come as a surprise, because Paul said we are going to face persecution if we live for God. Jesus said we will have tribulation in this world if we follow Him. But He also said we will be blessed for it, and He told us not to lose heart because of it.

And even though we would love for our children and grandchildren to continue to enjoy freedom of religion without fear of persecution―and there is certainly nothing wrong with praying for that and voting people into office who are committed to that―we know that at some point and on some level, persecution is going to come. And we know that if we trust in God and stay faithful to Him, we will overcome.

John wrote, in 1 John 5:4-5, “For everyone who has been born of God overcomes the world. And this is the victory that has overcome the world—our faith. Who is it that overcomes the world except the one who believes that Jesus is the Son of God?”

If you are on the right path, if you’re traveling the narrow road, it’s not going to be easy, but you will end up in eternal life rather than in eternal destruction.

It’s amazing how often Psalm 119:105 is the answer to the question. That’s the case here. “Your word is a lamp to my feet and a light to my path.” How do we find the right path? We let God’s word light it up for us, and then we just follow the light.

God’s Word is a lamp to our feet and a light to our path. We must run the race that is set before us, and God has set the race before us through His word.